Continuing down the east coast, lots of spectacular beaches with some challenging bodies of water to cross. The longest foot bridge in the south hemisphere and our first taste of sea Kayaking.
Songs used in this section:

Money in the Afterlife by Saturday Looks Good to Me. 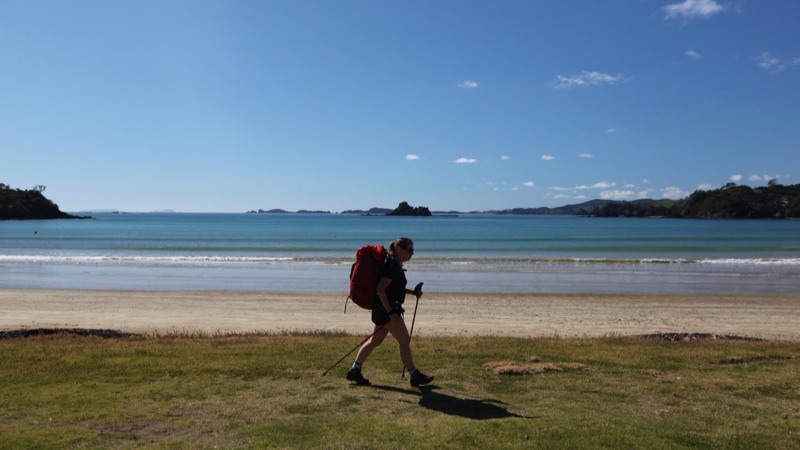 Wey hey a duvet day! ;) Well, kind of. We’ve not talked much about rest days. But on average we try and take a day off from walking about once a week. By then we are normally well in need of a hose down, and fantasizing about having a beer and a proper cooked meal. In fact it’s funny what you find yourself longing for when your a few days from town. I think the thing I’d often kill for is orange juice :) Or a big juicy grapefruit. Mmm! But I’d imagined before the walk that it’d have been steak or something meaty, but actually it’s fresh fruit and salad I crave. Something with nutrients in! ( Ok … and Fish and chips ;) )

We thought we’d pass a dairy this morning at the junction of Oakura Road, but the man doing work on the building that looked like it used to be a dairy said it was a mile down the road. Our anticipation of fizzy pop encouraged us to make the detour and once we were down there and discovered the beautiful bay with a fish & chip shop, we decided to stay for a day!
Permalink
Beach Chilling Nicky Top Tips Towns
0 comments
21 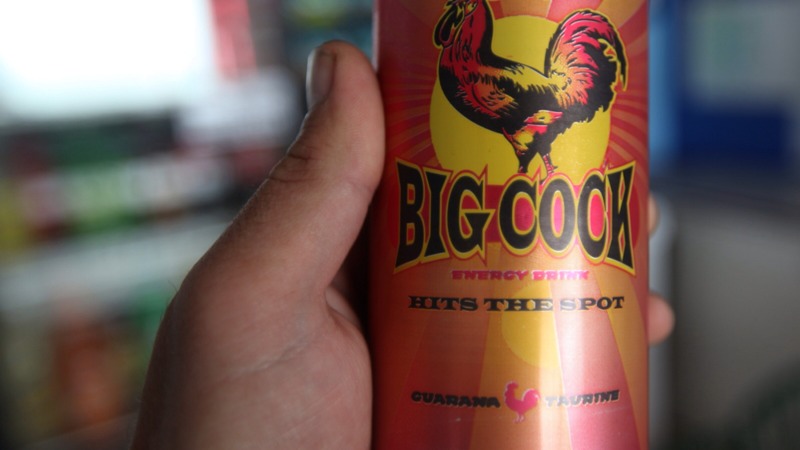 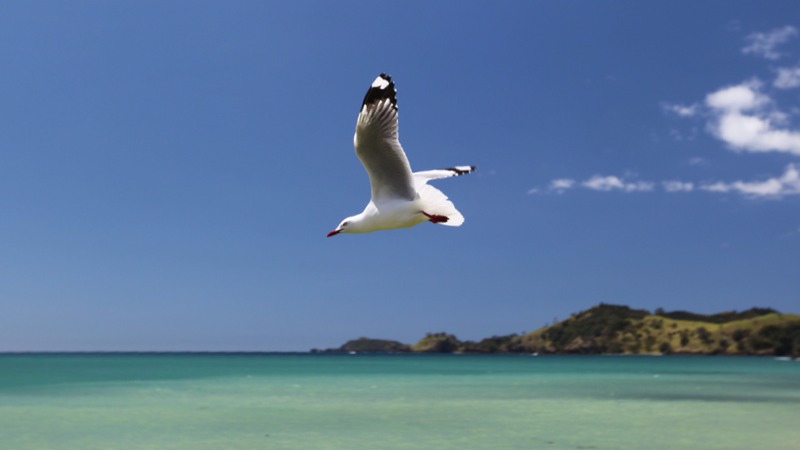 The zoom on my camera only goes up to 35mm, so is generally pretty useless at wildlife photography. Luckily Steven Seagall was putting on a good show today and flew straight past our picnic bench :) 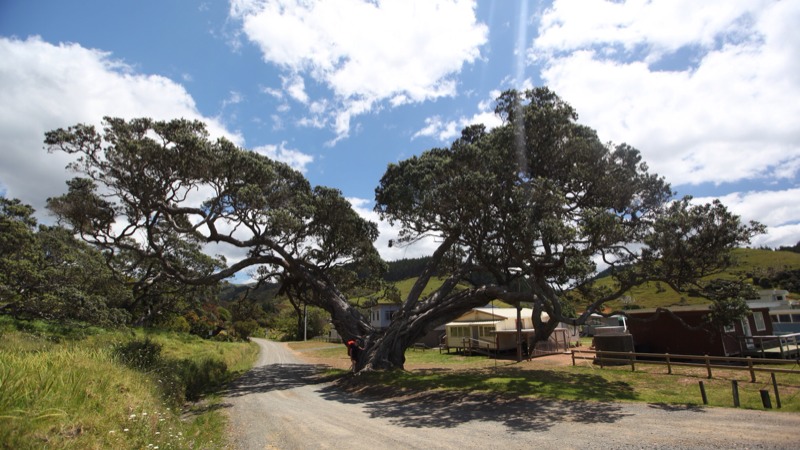 This is the tree was here when the fella we met’s great grandfather was here. He used to camp under it as a boy. Our man was even silver haired so I imagine this tree is probably a ripe old age by now having four generations sit under it. Love it’s twisted multi-strand trunk. Feels like something from a Sleep Hollow.

We’re not entirely sure what kind of tree this is, but after a bit of googling, we think it might be something like a Pohutukawas Tree? Anyhow, it’s a cool gnarly old tree that clings to the coast round here. This one in Helena Bay was a pretty epic example.
Permalink
Flora & Fauna Nicky
1 comment
22 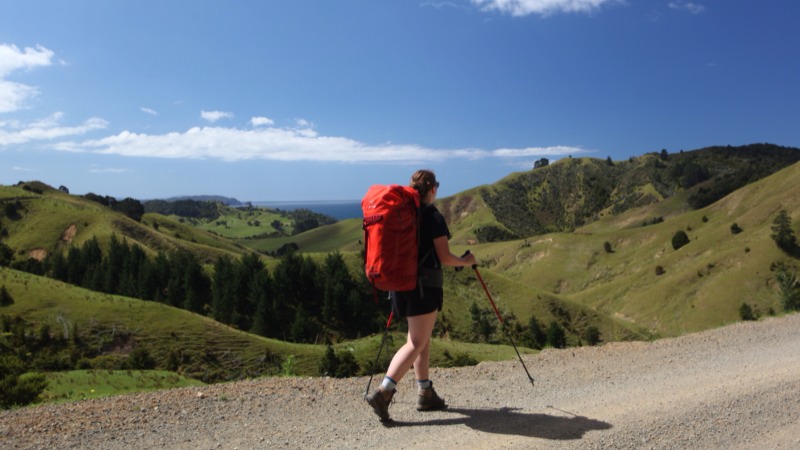 The hills by the sea in the Northland seem to be so humped and bumped in an almost cartoon way. Very similar to the way Cookie’s drawn them above funnily enough. Really gorgeous vibrant green to look at, and all textured with rippling grooves and ledges reminiscent of rice fields. I assume the cattle and sheep carve the steep slopes into stepped highways after years of grazing. You don’t often see too many sheep near the roads though… as we’ve heard stories from farmers about sheep rustling !! ;) Really! 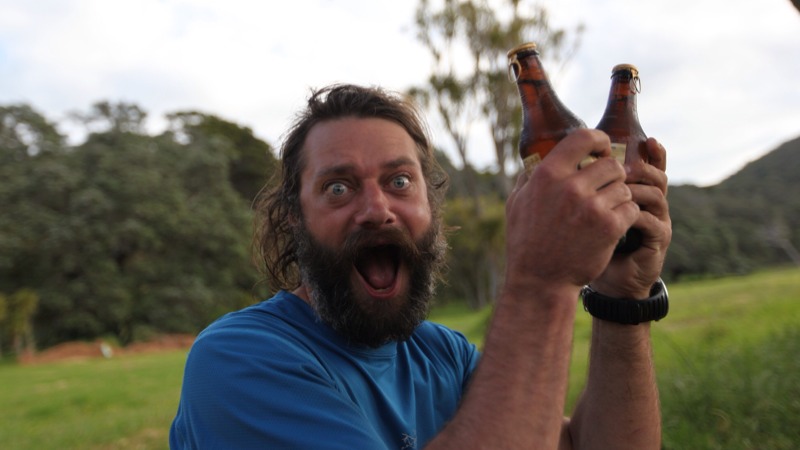 After a day of discovering some awesome beaches we ended up in the DOC ( Department of Conservation ) campground in the Mimiwhangata Coastal Reserve. After an epic, hot and sweaty 13 mile day we were so thankful when fellow campers Aiden and Helen popped over to introduce themselves bringing with them cold beers! Wuhoo! What awesome lovely people :D We salute you! 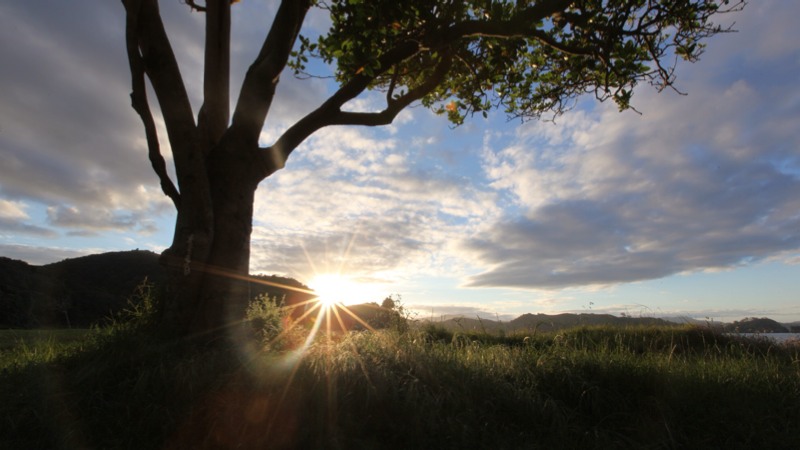 Some great views here gazing over the sea as the sun went down eating our instant pasta dinner. But it tasted good :)

Just found out that with the cameras aperture set to minimum seems to make the sun look like a star, cool :)
Permalink
Beach Landscape Sunrise/Sunset
1 comment
22 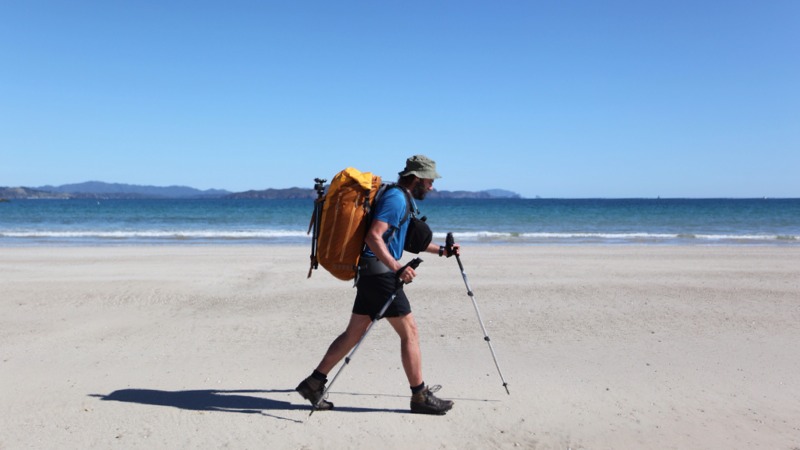 We’re off trail at the moment, on an alternate route that I thought looked interesting on the maps (yellow line). Didn’t realise that there was a DOC coastal park down here, or how stunningly beautiful it would be. This has been by far our favourite section to date :) Word of warning though: After Te Ruatahi Island the park ends and the final stretch to the road, Pareparea Bay is a private beach. We found this out from the Maori living at the end of the beach, who to be honest didn’t look too happy about seeing us initially.. But were quite amused by our walk across NZ and gave us permission and directions to get out onto Rockells Road. Phew, was worried for a moment we’d have to do a hell of a long walk back if they didn’t!