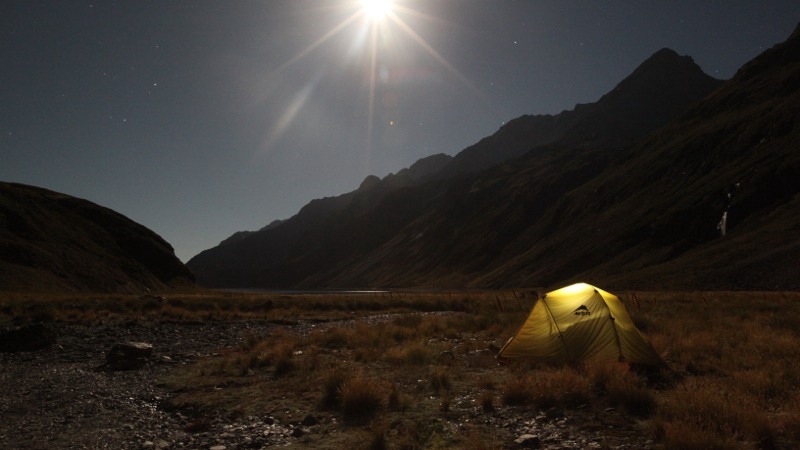 We decided that combined with the day getting late and this being such a breathtaking spot, that the only choice was to set up camp and capture some interview footage. With the sun setting, the shards of rock towering above made for a spectacularly evil backdrop.

It’s cold up here at night. As well as wearing all my clothes at once, even gloves, I had on two pair of socks. Yes, Two! People who know me will be shocked to hear this. I never wear socks at home and certainly not to bed. Cookie and I never normally shut up about how uncomfortably hot we are. But for once, I even zipped up my sleeping bag – for probably the first time in my life! With the altitude cooling the air at 1300m, it was just above freezing. Now that’s what you call a chilly snooze.

I woke up needing a piss in the middle of the night and thought it was morning it was so bright in the tent! Turns out it was only midnight, but with clear skies and a full moon right above us it felt like dawn.

That’s the moon in the sky, not the sun, click the image to view it big and you can see stars in the sky, honest. I’ve never had a camera before that can take really long exposures, I froze my arse off paying around with the settings trying out different shots, even woke up poor Nicky to light the tent from within with her head torch. Worth it though, got some great shots :) I was surprised by how much colour the camera picks up in what looks like a completely monochrome landscape to the human eye. This won’t be the last time I play around with night shots now I’ve had a taste. 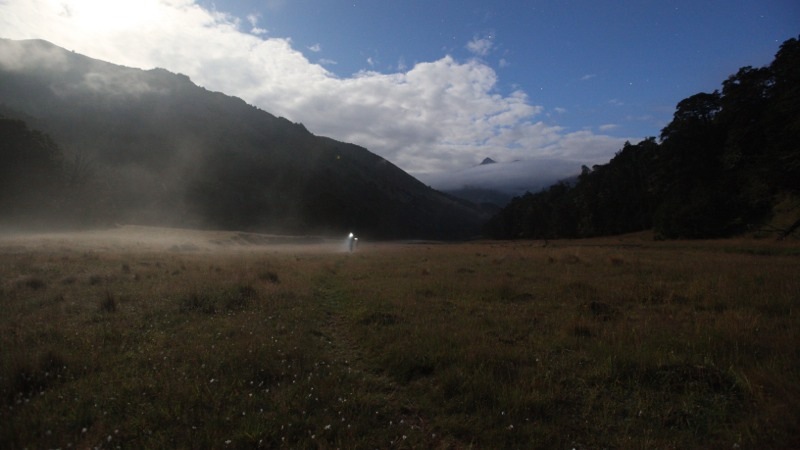 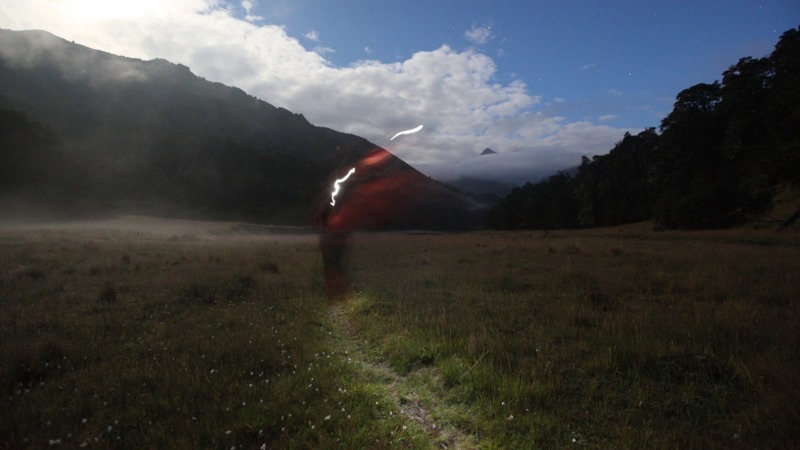 I really liked how these night shots turned out so had to post another of my favorites :) It was actually much darker to the naked eye, all we could really see was the patch of lit up path in front of Nicky here. 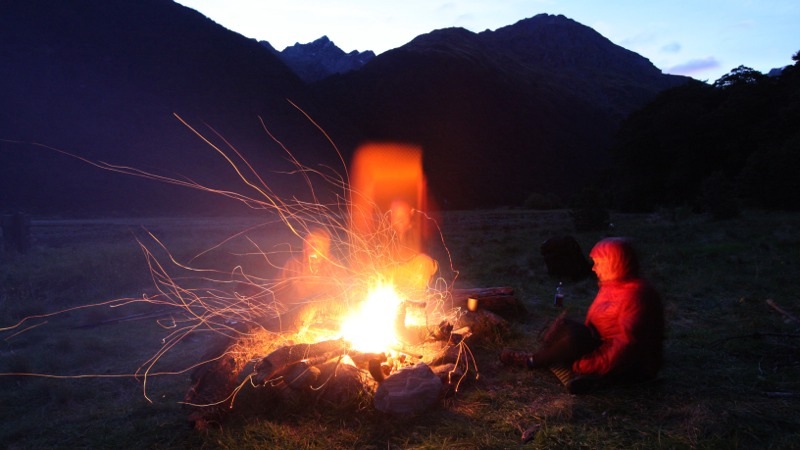 Not staying at the hut has it’s advantages – you can crank up a nice fire and sit round telling stories and sipping hot toddies until late into the night ( or at least til 8:30… we’re hikers after all ;) ). Here Nico does a sterling job with ‘The Wafter’ keeping the light and heating roaring at our new home. Mmmm toes released from the boots, and revived with the warmth of the fire, noodles scoffed, and rum sunk, a deep sense of snooziness prevails… It’s time to get zipped up in the thermal maggot bag as our eyes start to sink slowly into the closed position… Zzzzz A satisfying day :)

The orginal plan was to get to Siberia Hut tonight, a further one hour down the valley. But we found a massive fire ring when we popped out onto Siberia Flats so felt obliged to fill it with fire ;) Camping here was also a much better location to take in side trip up to nearby Crucible Lake tomorrow (didn’t have to walk that hour back up here again).
Permalink
Campfire Camping Nicky Nico Night Ollie
0 comments
135

Milky Way and Frozen Tent in the Morning 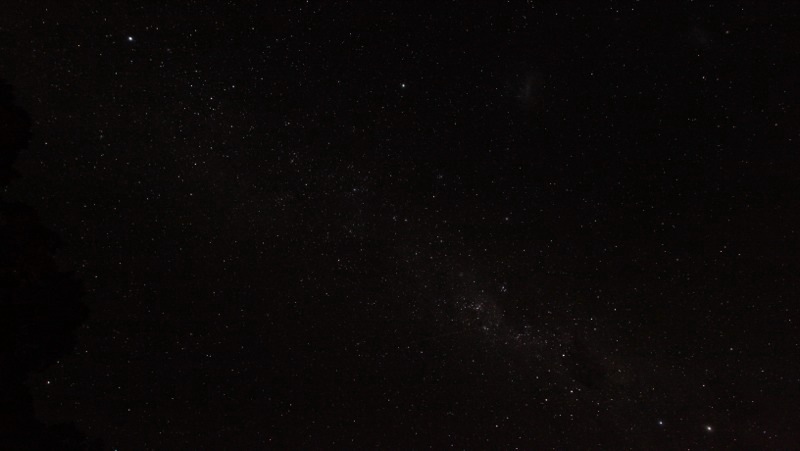 “WOW Look at that sky!” You can see soo many stars here in the mountains, with it’s clear air ( and very ‘lean’ atmosphere shall we say ;) ). Stunning and mesmerising. With that and the flickering flames to gawp at, who needs tv….“Ooo! Shooting star!!!“.

Waking up in the morning in my Rab bag felt super cosy. It’s a struggle and a half to convince yourself it’s a good idea to get out into the freezing cold outside for sure! There was even a bit of ‘crispy tent’ action, as we’d frozen over in the night. Oddly though I slept really well! One of the few nights I’ve not been too hot ;) But nipping out for a wee in your pants in the dark is only for the brave…

Clear sky tonight and an amazing view of the stars. We’re not usually up late enough to see the Milky Way, but the prospect of heading back to our frozen tents when we could sit around a nice warm fire drinking whiskey late into the night was way too tempting ;)
Permalink
Camping Night Photography
0 comments
135 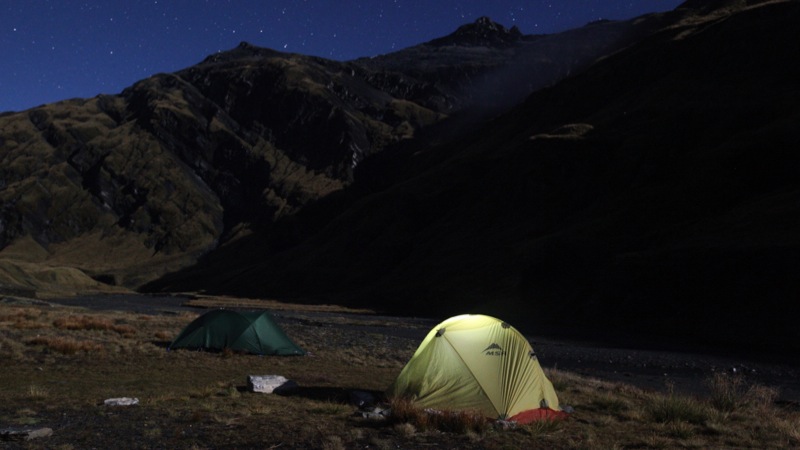 A midnight tent shot here. Cookie always asks me to wake him up now when I go for a tinkle in the night, in case there’s some great moonlight or starscape shots to be had. We found ourselves a good spot, not too soggy, not too rocky. And sat round for dinner. Lurking in the shadows, unknown to us, we were being watched …

At first we heard the noises … like drunk seagulls. Then suddenly, some rustling behind you… “Bah!”, “What was that?”, “Ooo creepy”. Squinting into the darkness, trying to make out shapes in the long grass… Something was darting around. Getting up to investigate, we were unaware we were being cunningly lured away from our pots and pans, sporks and cheese… Suddenly! A tinkle and jangle over your shoulder by camp. “Woa! How’d he get over there so fast?”. It was an ambush! Teams of Kea were circling like wolves, keen to get their hands ( beaks! ) on anything sparkly or tasty. We were sitting ducks. Hurriedly gathering everything together, tying our boots to our rucksacks, and stashing the rations, we ran at them to chase them off. Not realising the kea were only playing along, looking scared, only to about-turn immediately and softly creep directly behind you back to camp – their feathery faces silently giggling to themselves all the way. Cheeky buggers!

The ambushes came in waves throughout the night. The enemy choosing to wear us down via sleep deprivation. Through a combo of squalking to keep us awake, and, should any of us make the silly mistake of dropping off, nipping under the tent shell to peck us sharply on the heads through the mesh! Now you’d think it wouldn’t get much more brazen than that.

But Seriously, many a time I awoke to find a big beady eyed beaker tucked under the outer sheet starring me down with suspicion – cm’s from my face as i slept. Creepy! What did he want?? Why me?? This bird’s a psycho.

I tied my metal mug to our boot laces and both pairs back to my rucksack. A rudimentary, but effective Kea burglar alarm. And shockingly enough, not a few mins later, but “tinkle tinkle” … Sitting bolt upright I was just in time to see one of Cookie’s boots being dragged off outside from under the top sheet, boot lace pulled tort, rucksack clip squeaking and straining. And what was obviously one of the enemy outside putting his full effort into liberating this shoe off into the darkness. Kind of impressive in a way, but also shocking the strength of this Alpine Parrot. What was he thinking? His feet were way too small for these boots. Did he want to eat them? Whatever the reason, it seemed a life or death mission for this little fella. He had to have this boot, no matter the cost. Stunned, i retrieved the footwear. And satisfied i’d seen off the assailant, went back to bed.

This cycle of torment went on all night. The little shits :)
And this wasn’t the half of it… Whilst carefully diverting our attention, another crack team of sharp faced sadists were hard at work on their main mission. The extent of which was yet to be revealed until daylight… 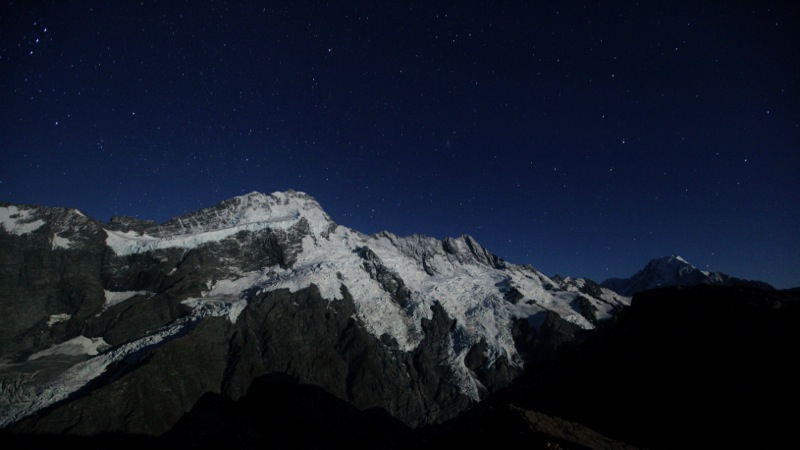 This is the view from our tent door in the middle of the night. It’s bloody cold as you can imagine! But if there’s ever a time when struggling out of a warm sleeping bag at night was worth it, this must be it.

Numerous avalanches came down as we slept. Creaking and crumbling followed by ground shuddering rumbles. Pretty awesome. They felt so close! Thankful of the sharp but deep narrow valley between us and the action. Otherwise it might have been a little too ‘exciting’ ;)

We had a big moon tonight and clear skies, perfect for night photography. Some of the shots I got of the Sealy Range and night sky blow my mind, I got avalanches in action and even shooting stars :) Mt Cook is lurking in the back of this shot, his face is in shadow from the moonlight, but don’t worry, my alarm is set, I’ll get him later when the moon arcs over.

I recommend clicking these next few images to see them nice and big!

Going For a Wee in the Night Has It’s Advantages 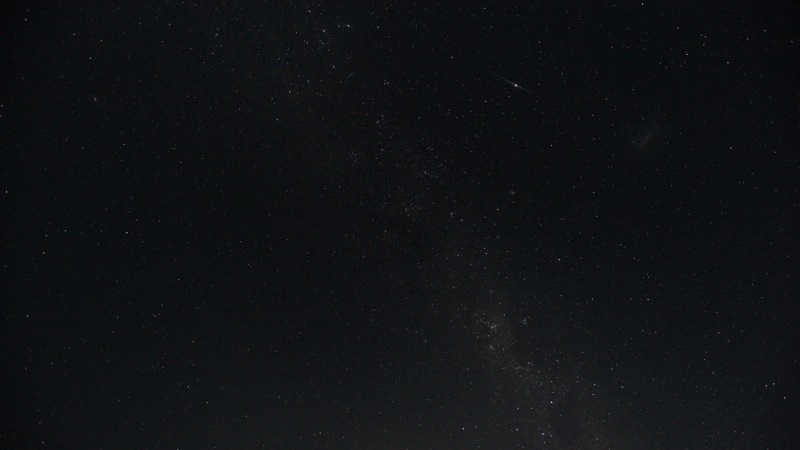 The stars here are breathtaking. Even with my crappy eyesight I can see other galaxies. It’s just amazing. Wish I had a telescope!

It’s well below zero up here, there’s only so long you can spending looking at them before retreating to your warm sleeping bag!
Permalink
Camping Night
0 comments
153 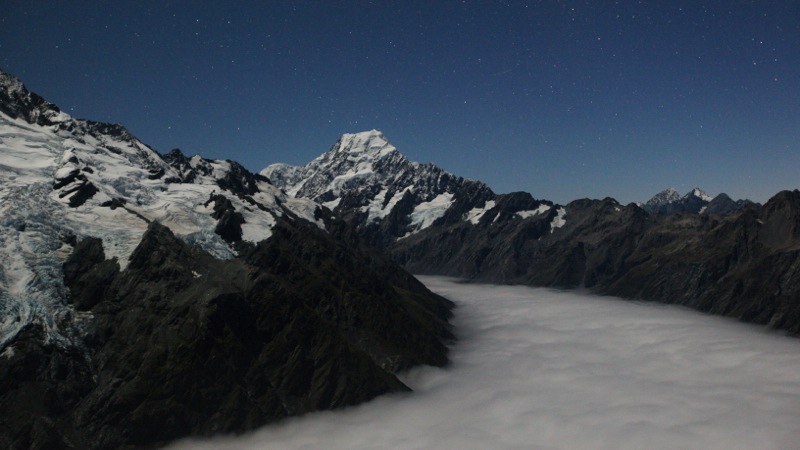 A blanket of cloud lay down in the valley. Magically we sat above it, with a plane-window-seat view of the phenomenal scene. Once upon a time that valley below would have been filled with glacier up to that cloud level, all the way for miles and miles. The soft white blanket deleted any sign of human existence, transporting us back, deep through time to an eon long ago. We sat on the mountain ledge, with an illuminated Aoraki ahead, the only humans left in the silence of time and space.

This shot isn’t actually taken at midnight, that just sounded good as a title ;) It’s early morning, dawn is just around the corner, and I am blown away by what I see before me!

I’ve been snapping shots of Mt Cook for the past 12 hours, waiting and hoping for ‘that shot’, the image that will be forever burned into my memory and remind me of my experience here.

This is without doubt, ‘that shot’.

Crazy Cloud in The Last Moments of Night 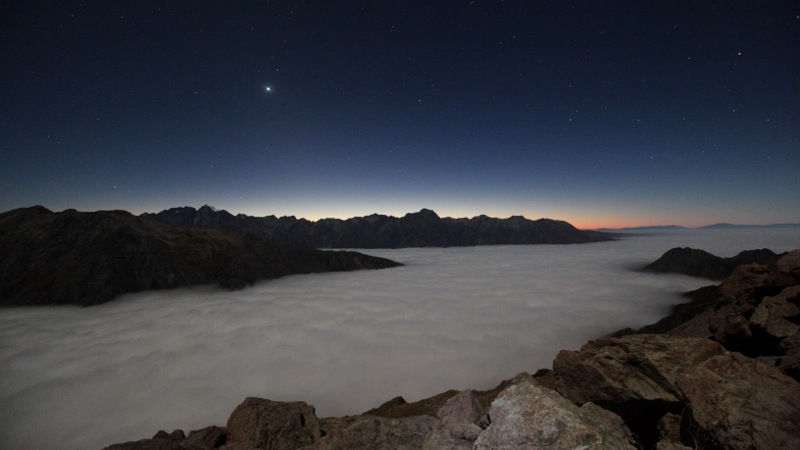 The cloud that looked like snow, lay sleeping in the valley, awaiting the warmth of the sun to lift it into life again.

The sea of cloud stretched out as far as the eye could see, high mountain peaks looked like islands nestled in the milky froth.
Permalink
Cloud Epic Mountains Night Sunrise/Sunset
1 comment
153