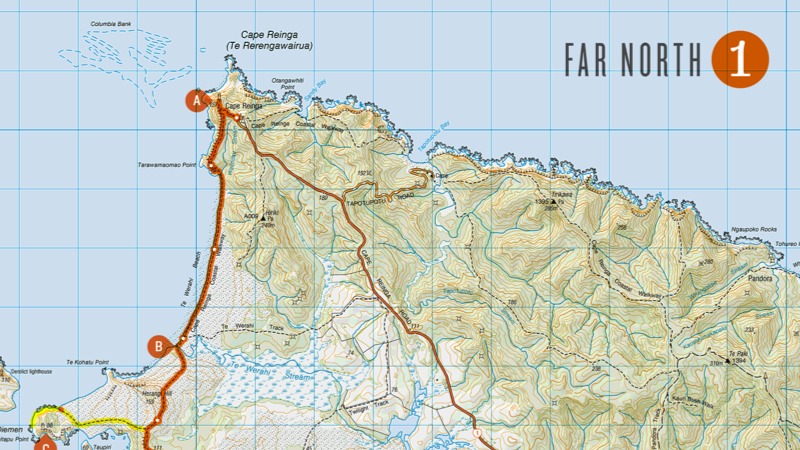 Update: There’s now an official printable map set from the Te Araroa Trust, you’re best using these for the most up-to-date and accurate route info.

If you’re planning on doing the Te Araroa trail in New Zealand, or just fancy having a closer look at what me and Nicky are going to be doing for the next 6 months, then here’s all the maps (268.4MB)! I can’t guarantee the route I’ve drawn on is accurate, the route itself is constantly changing, but also expect a fair amount of human error! If you use these maps follow your judgement and common sense, over the orange line. I didn’t get around to making all the map notes I’d of liked too.. but I’ve run out of time now and need to get on with other stuff. My plan is to check for the latest route descriptions and read people’s journals to find out info about the next section as we go and then doodle these notes onto my printed out maps. I’ve left a space on every page to be used for this purpose.

I always enjoy the pre-walk planning and mapping stage, although I’ve never bitten off anything even remotely as complex or long as this before.. Got to say a big thank you to Land Information New Zealand who made all the 1:50,000 scale topographic maps and hats off to you for making them all freely downloadable :) The Te Araroa Trust for building the trail in the first place and providing all the route descriptions on their site. And most importantly to Geoff Chapple who founded the trust 16 years ago and who has been spearheading it’s development ever since.

When you’re following a pre-defined route, there’s always the temptation to work out a few variations that suit you’re own preference of terrain etc. While mapping the trail I managed to rack up more than I was expecting, 57 maps worth in total! I’ve got no idea how many, if any of these we’ll do, those sort of decisions usually make themselves at the time. But if you’re interested, these can be downloaded too (164.9MB).

Word of warning though – I’ve never been to New Zealand, so have absolutely no personal experience whether these are any good or not. I think they are all probably longer and more difficult than the official route.. But they do follow the same numbering as the official route maps (just with a ‘b’ after the number) so you can see where they fit into the trail. 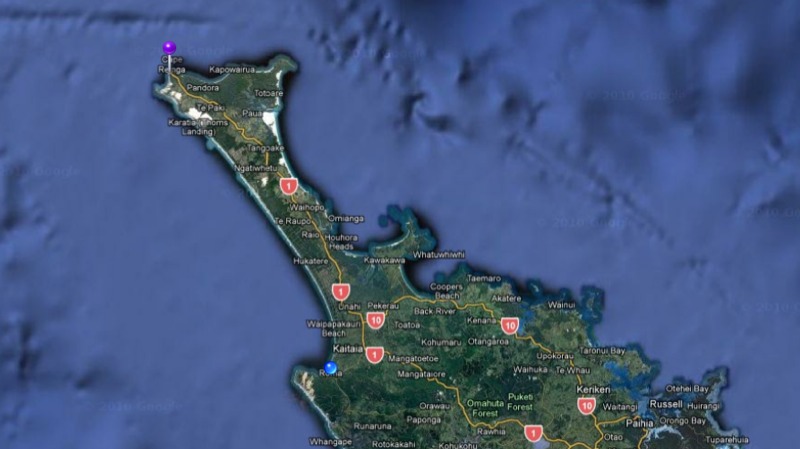 Finally got our first trail beer at Ahipara, no pubs though.. Had to carry a big box of them a mile from the liquor stove to the motel before we could finally crack one open. Well done Nicky, first section under your belt.
Permalink
Booze Epic Maps
3 comments
7 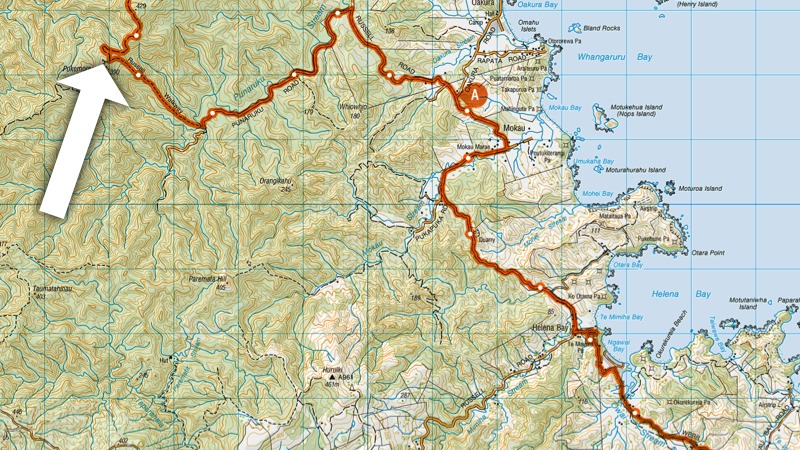 I think its worth pointing out this section out to any hikers behind us, not that it was really that difficult (just unpleasant), but because this short section seemed out of character from the rest of the Russell Walkway, which made us think we were either off trail or had missed a re-route. Trust me it is the way, just keep plowing through, it gets much better once you’re off the 4×4 track, the path section down Pukemoremore (still cracks me up) has steps built and everything!

Keep your waterproofs handy, you’ll need some protection from all that gorse, although it can get pretty hot hiking midday in a humid forest, all togged up and the sun beating down..

Wringing out the sweat: 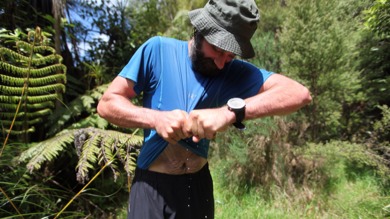 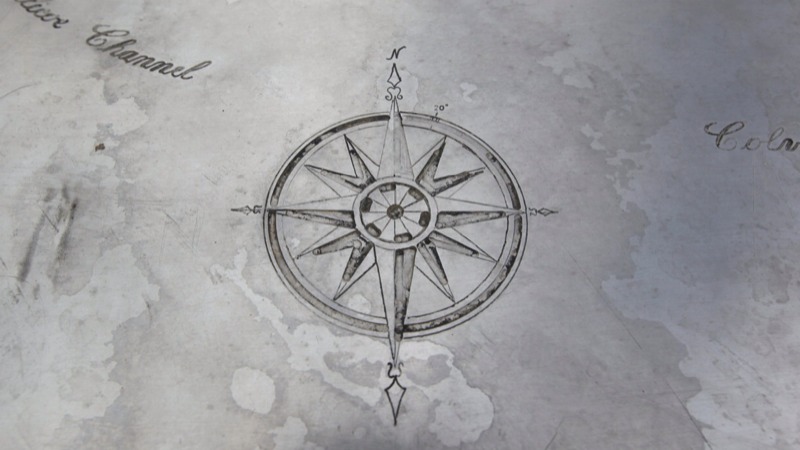 We’re making a detour! There’s apparently some great stuff to be seen, done and tasted over here in the Coromandel Peninsular. So we’ve decided to switch out a chunk of our south bound Te Araroa trek and pop over here instead :)

Yep that’s right, we’re taking a sizable departure from the Te Araroa Trail and heading in the wrong direction, North! The Coromandel was one most recommended places to visit by friends we quizzed about New Zealand, so we didnt want to pass it by when it’s only a ferry ride away.

Not quite sure yet how it’s going to pan out yet or where and when we’ll meet back up with the trail again, but it will probably involve my parents driving us back to the trail at some point (they’re visiting us at Christmas). For the time being we’re going to head up the peninsula to the Coromandel Walkway at the very top and see what happens! 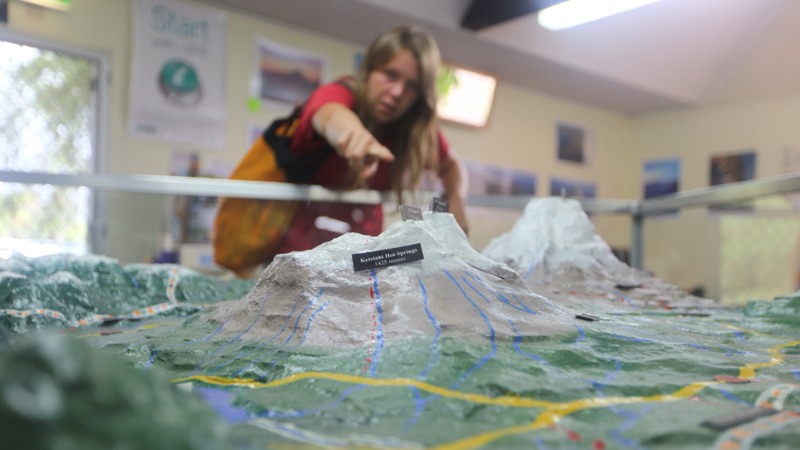 Big model of the volcano range that holds …. MOUNT DOOM! Dah daa daaaaaa… That we’re heading up tomorrow. (Gasp!) Good job a have Gandalf with me. It’s a 20k jaunt to cross the range. Hobbits only have little legs, so I may need a piggy back.

At last there’s a break in the weather forecast for tomorrow, just planning which volcano we’d like to climb on this here scale model. The official trail, which we haven’t been on for soooo long.. passes through these parts and takes in the The Tongariro Alpine Crossing. We’ve decided to add to that an ascent of Mount Ngauruhoe, the volcano in the middle that Nicky’s pointing at (which was used as Mt. Doom in Lord of the Rings, much to Nicky’s delight).
Permalink
Maps Nicky Towns
0 comments
61

Walking across New Zealand in about 20 seconds 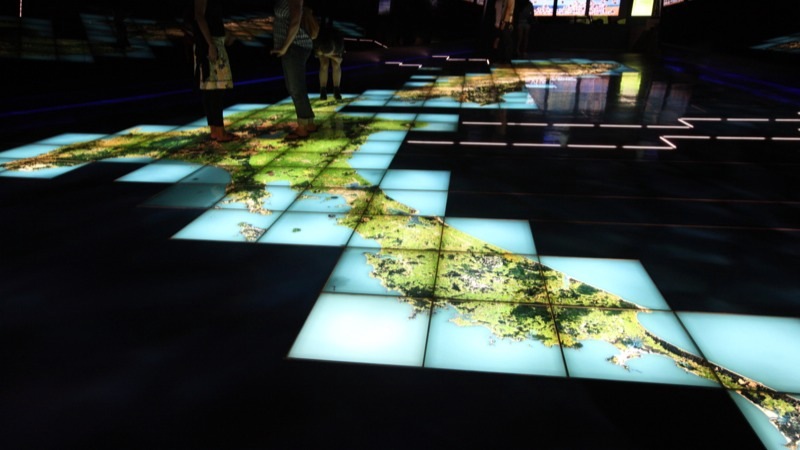 Since we were way back north in Mangawai, where I first heard about the giant squid, I’d been waiting to catch a glimpse of this awesome sea monster! My mind full of old pirate tales and etchings of legendary giant monsters I have to admit I was getting secretly quite excited about the encounter. That, and it was good to have something, anything, to focus on to get myself to the half way mark :)

I think watching Pirates of the Caribbean the night before, with that giant octopus that swallows a ship may have gotten my hopes too high… The Colossal Squid wasn’t nearly as terrifying as I’d hoped. About 3 metres long maybe? … But when you consider the size of a normal squid I guess he’s still pretty special. Perhaps not the scene from Mega Shark vs Giant Octopus I’d been imagining, but still monstrously ugly at least! :D

Wellington seemed the most culturally vibrant place we’ve walked through so far. Cuba Street with it’s many cafes and vintage retro clothes shops had a bit of a warm Shoreditch vibe about it. It felt personal and homely for a city. Architecturally it had hints of San Francisco with it’s steep hills stepped in pastel coloured decorative wooden houses. And even it’s own old fashioned tram come cable car. I would love to have spent a few lazy sunny days checking out the nooks and crannies of this compact city. Unfortunately the rainy gale-force winds, combined with us visiting on a Sunday and a public holiday, meant not much was open, and ambling round got you cold and wet more than anything. Shame!

Also our iPad decided to dish us a plate of anxiety, crashing in a spectacular fashion, meaning we got to spend one of our hard earned days-off standing uncomfortably next to a mac in a computer shop trying to fix it while apologising profusely to the staff!

And on that note, a massive thanks to the staff at Yoo Bee / Magnum Macs in Wellington for helping us out and putting up with us loitering for the day! It means we can continue with this blog of our expedition, so Thank You fellas! :D

The weather was very poor while we were in Wellington, so we didn’t venture too far from our base in Cuba Street.. The only cultural delight we actually took in was the Te Papa Museum. Mainly because Nicky wanted to see the Colossal Squid they have preserved in a tank, which turned out to be not quite as colossal as we had both imagined. Our favorite exhibit was this massive illuminated map of New Zealand, fascinating to re-trace our steps across the North Island and look ahead to the South. It’s a free museum, would definitely recommend to any TA hikers behind us for this map alone.

Treasure Map to a Secret Place 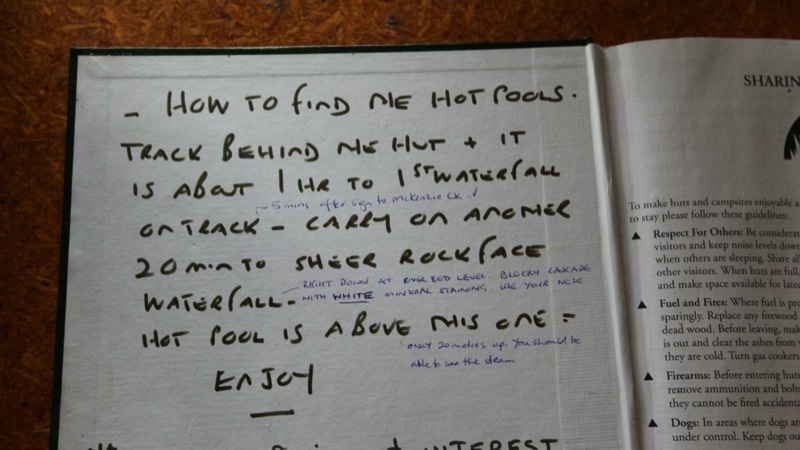 Clues in hut book comments suggested there were hot pools nearby to be investigated. Lots of notes and contradictory directions suggested they might be tricky to find. But we were keen for a wash, and with the cold weather we suspected we might be able to spot the steam in the undergrowth more easily.

And so with a photo of the clues, and bikini at the ready we set out to rummage around the forest til we found the magic. 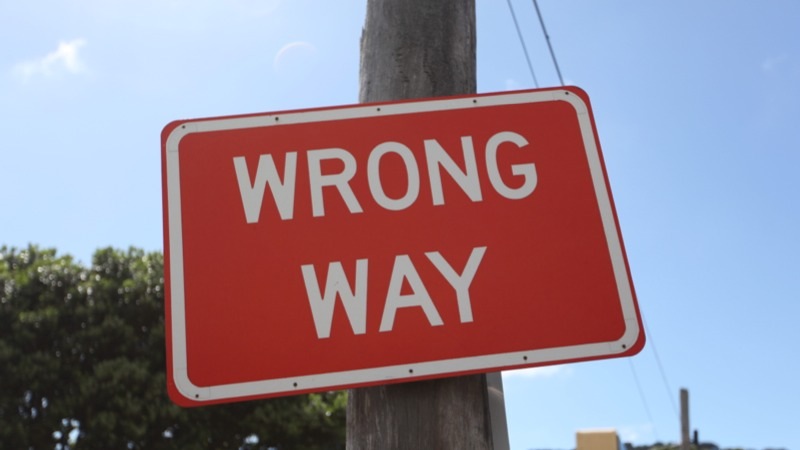 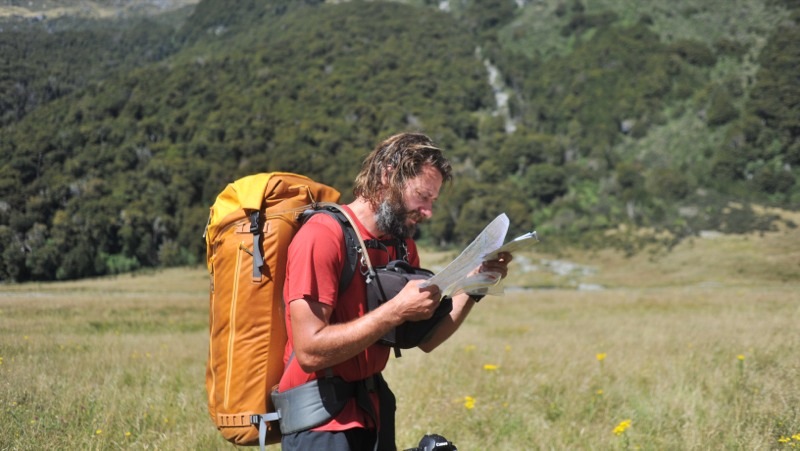 Cookie spent weeks before we came over painstakingly drawing out the routes we might take over A4 slices of the Topo50 maps of NZ. It’s amazing that, unlike the UK, they let you download the whole country for free! So for every possible section we might decide to detour too he’s marked out every twist and turn across the entire county. Essential kit, and a monumental effort. Amazing work Cookie!

Apparently the first bloke to make his way up this valley (looking for trees to chop down) rode up on a thourghbred called ‘Jumbo’, it seems Jumbo got left up here somehow and the place has been known as Jumboland ever since :) We’re not actually lost in Jumboland, the track just disappears across these big meadows so we’re just checking what direction to head in.
Permalink
Cookie Maps
0 comments
137

Aitutaki Atol – Deep in the Pacific 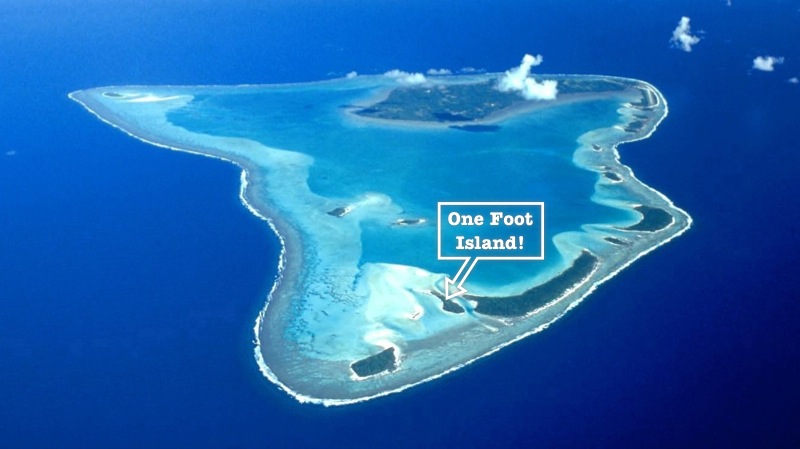 When we say our island is in the middle of nowhere, it really is! Aitutaki atol is surrounded by infinite deep blue ocean. Stunning! “Cookie! I think I can see a Pirate ship over there!”