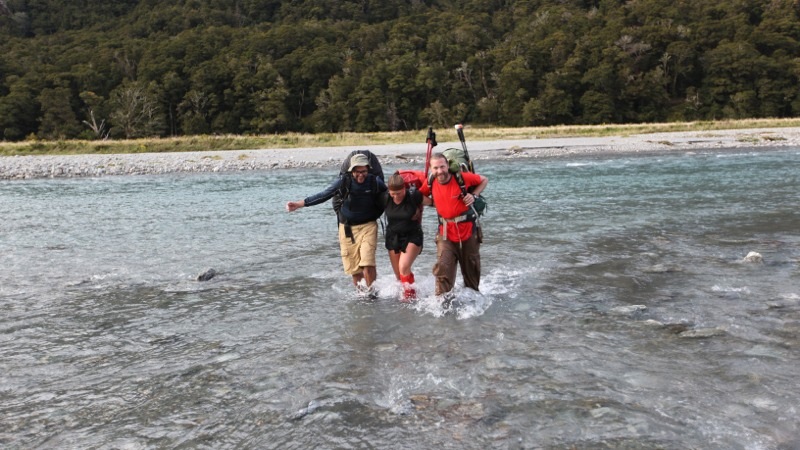 Our home for tonight would be Kerin Forks Hut. Right at the end of the day, and no matter how dry you’d managed to keep your boots til now, them dry socks were not going to see tea time. A large river stood in our way. The cozy log fired hut tantalisingly close, tucked in the woods on the far shore.

It may not look it from the photos, but statistically speaking, river crossing, not mountain pass climbing, is the most dangerous thing you can attempt in New Zealand. More people get swept off and conked on the head than anything else each year. So this was no time for pissing around.

It may not look deep, it may not look fast, but trust me, in the centre of that flow once you lift a foot, it’s quite a challenge to keep your leg pushed down vertical against the current, and then get your foot back firmly on the floor again against the water pressure while taking a step. And getting a firm footing, where you intended to put it, and not precariously balanced on a rock or boulder is another thing altogether. This coupled with the force of the water building as the level passes your knees and waist. ( Chest height would be utterly impossible ). And so picking our spot to cross was critical. Judging the potential depth and speed of the current of the utmost importance. Locked together in the recommended safety formation, gripping each others hip belts tightly to form one solid interlocking human wall, strongest man upstream, you slowly and carefully move forward as a unit, one foot carefully at a time, in line with the flow of the water to help minimise resistance. And all the while vocally checking on each other and that we all had secure footings. A slow procedure, and with a bit of adrenaline, the four of us carefully shuffled through the icey water!

Here’s a quick reconstruction in a shallow bit half way across the fork of the last two channels just to show you ;) But during the real crossing cameras were banned. All hands needed focused on the job :) But we did it. And it felt good to have made it! Many people book a jet boat from the village to come up and carry them across. But we did it the ‘proper’ way! Yey!

I was privately pleased to hear that everybody else we saw up the next valley had all caught the jet boat across and we were the only ones who did the ford ;)

View Across Main Branch of Wilkin River. It was faster and deeper than it looks! 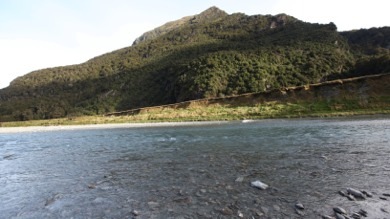 This was the toughest ford to date. We followed the recommend DOC technique of linking together arms sandwiched between backs and rucksacks, and hands secured tightly to hip belts. I must say it did feel very stable locked together, much more so than I had imagined. I went upstream to take the brunt of the current, but Nicky was the star taking charge of communication – Slow down, bunch up, wait and get a good footing. She’s a river crossing pro now :)