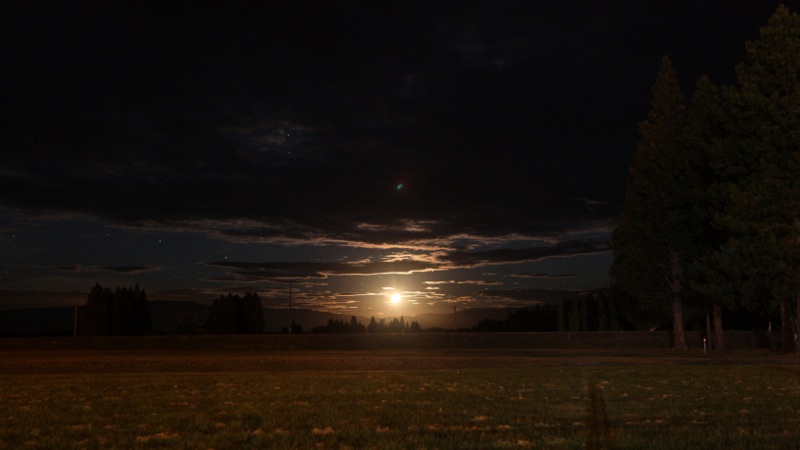 Twizel was our home for much longer than we’d meant it to be :) But after a couple of epic sections with Ollie and Nico, followed by the unreal experience of Aoraki Mount Cook, there were hundreds and hundreds of shots to go through, upload, and write for. Plus a little resting, and a bit of partying to squeeze in. Somehow, even though this is technically a ‘holiday’, we’re always pretty busy it seems!

The main event was finally meeting The Tasty Trekkers! Yey! They’ve been chasing us across the whole county for months and finally they nabbed us. Lots of booze was drunk and stories exchanged, so much so that we forgot to grab their picture! But not to worry, we’d be racing each other over the next two sections. And there was plenty more partying to come… ;) More on that later.

Our home in Twizel was the letter ‘E’ in M O T E L, and extremely comfy it was! I can totally recommend ‘E’ as a place to relax for a few days. I just hope the cleaner didn’t freak out too much at the amount of empty beer cans and rum bottles we left behind ;) Haha.

Mountain Chalet Motel in Twizel. We have total weak spot for motels that come in a triangular format. 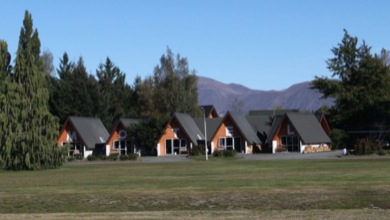 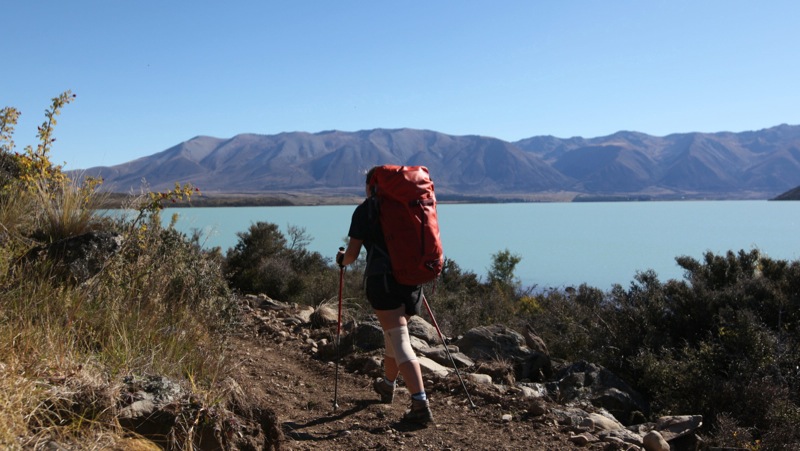 Maybe it was the lingering hangover, or blogging frazzling our brains, but Lake Ohau proved to be a bit of a navigational challenge! Sometimes too many tracks to choose from, and sometimes no track at all. But we made it round, in the end ;)

We fortified ourselves with breakfast at the Alpine Cafe before leaving Twizel, but not even their super-sized sausages could put the spring back into our step. Moving on today was a struggle after being stationary for 4 days..

Top Tip: There’s a choice of three 4×4 tracks at weir, highroad comes to a dead end by a fence line. Lowroad goes over the weir and onto the wrong side of the lake, middle road is the one you want! It doesn’t look much to begin with, but after a few 100m turns into an easy to follow fresh cut jeep track. 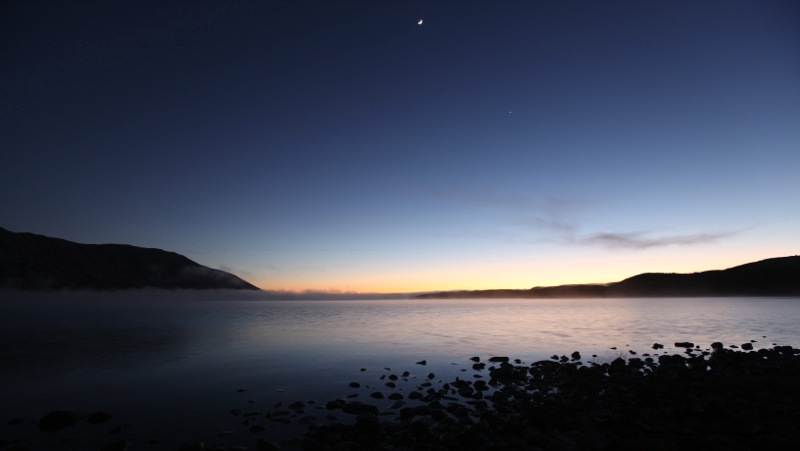 Having walked the road route from Twizel in the hot sun, and rummaging around in bushes a fair bit testing random routes out, we decided to call it a night and camp by the water. It’s always tough going after a couple of rest days, so by now we were feeling well off the ball. Beautiful mist here in the morning – taken by Cookie of course – I’d never be up in time ;)

We’d struggled enough today, when we found a spot of flat grass just before Moari Swamp that only had a light sprinkling of rabbit shit, we called it a day and pitched our tent. Beautiful spot, alongside the mountain across the lake – Ben Ohau.
Permalink
Lake Landscape Sunrise/Sunset
0 comments
159

Mysterious Mist and Barbed Wire Up the Bum 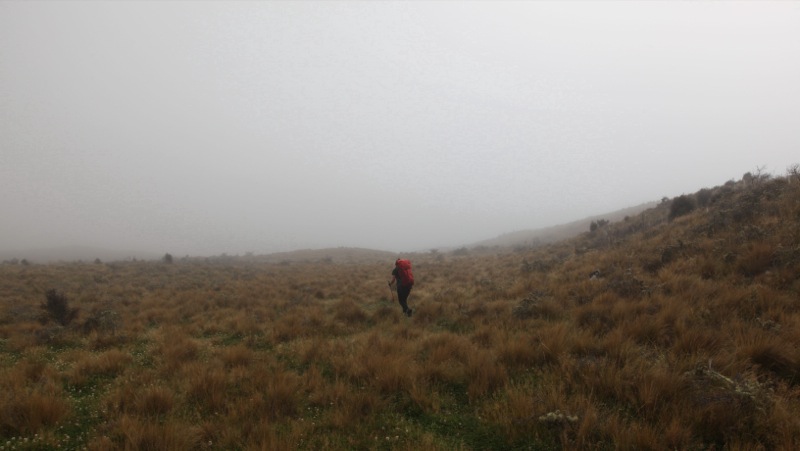 Crazy mist greeted us this morning. Thankfully we started out on a newly cut track circling the lake. Easy on the brain :) This track seemed to run out shortly after and we ended up wondering about on cattle tracks trying to stick to the lake edge, while avoiding as much of the dense Matagauri spikes as possible. Lumpy bumpy ground, barbed wire fences in the arse, and soggy boots made for a grumpy sleepy Nicky!

How hard can it be to follow the edge of a Lake? Too hard for us apparently! I think we suffered from ‘grass is always greener’ syndrome this morning, wandering off on cow paths that seemed like nice tread, only to find ourselves far away from the lake and a bit lost in the mist..
Permalink
Cloud Nicky Walking
0 comments
159

Fog Lifting as We Skirt Around Lake Ohau 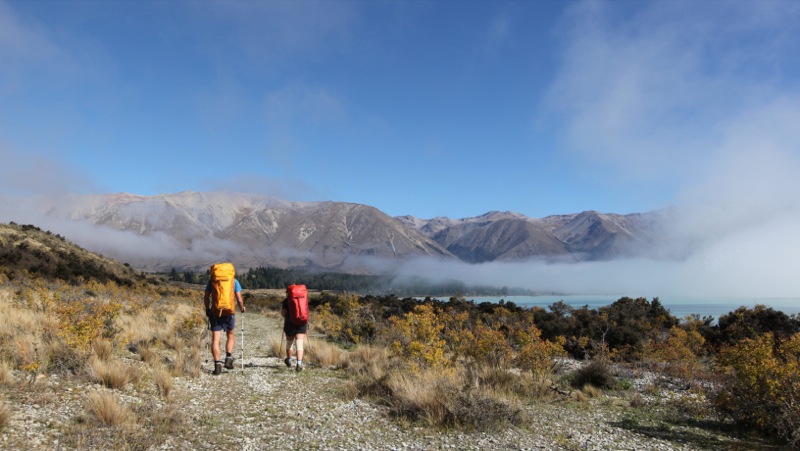 We heaved ourselves over a couple of fences and followed the cow tracks round the lake until the jeep track resumed by the forth and final fence line. Soon after we reached Lake Ohau Road and were rewarded with long views back up to the main divide through the lifting cloud. 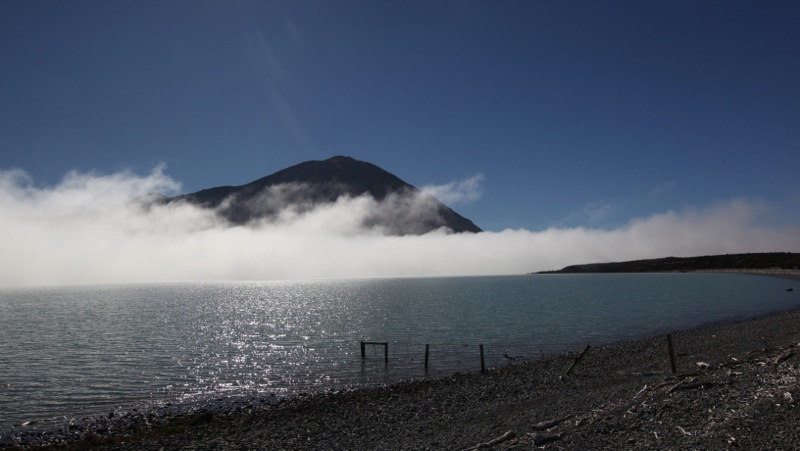 Cheering up as the sun came out there was some dramatic low cloud across the water. Going was slow, and after such an awesome section at Mt. Cook it kind of felt like we were ‘done’, that we’d seen the highlights. It was taking quite a bit of mental persuasion to keep motivated and that all this was worth the grunt :) 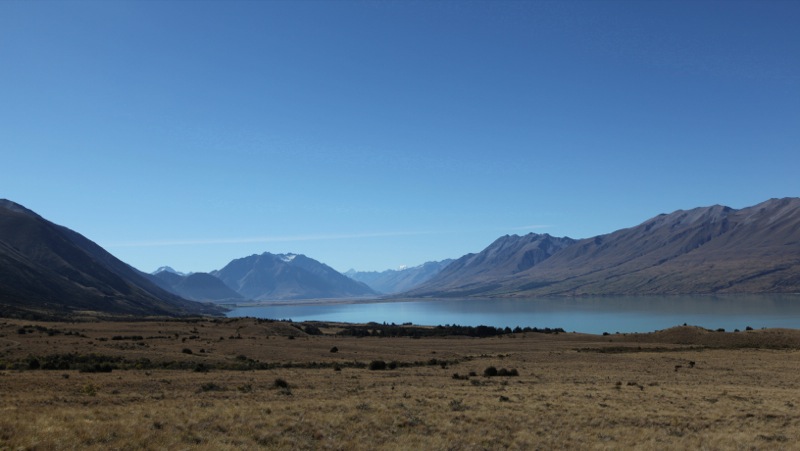 Lots more stumbling around and climbing about on dusty jeep tracks in the roasting sun. Lips drying to a crisp, head aching and energy sapping away. Not even sure we were on the right route, we were both in the grumps! That’s what we get for taking so much time off eh ;) It’s not easy to re-convince the body that 8hrs of continuous exercise a day is ‘a bit of a laugh’ ;) But we got warmed up in the end. But boy that was painful! Haha.

We followed the road to Glen Mary Ski Club where the confusion about the route began – The trail notes describe a different route to the line drawn on the map so we weren’t sure what to follow..  The Parsons MTB track zig zags about a bit and often in completely the wrong direction (to get to Freehold Creek), eventually it emerges at a DOC track (which isn’t marked on the Topo 50 maps) which traverses the top edge of the valley and leads to Freehold. It seemed a bit of an arse about tit way of getting up here, but presumably there is some sort of a land ownership/access issues, there is a lot of expensive looking nice houses round here!

Top Tip: We past a campsite I didn’t know about on the way, probably should of aimed for yesterday, it was just after Lake Middleton, it looked quite nice. 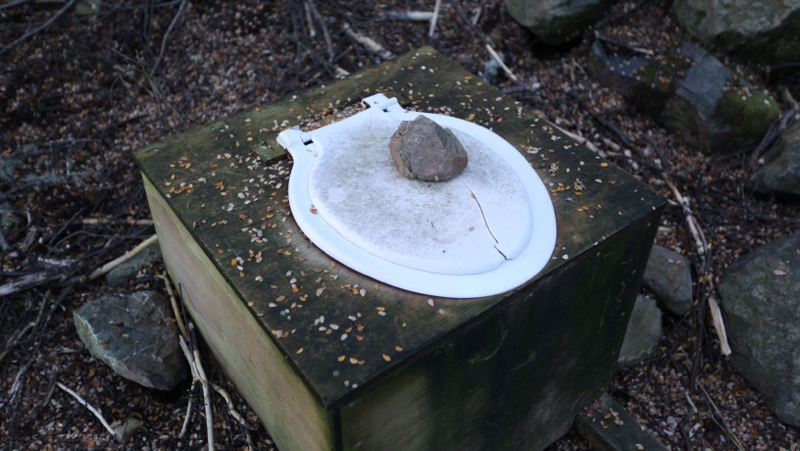 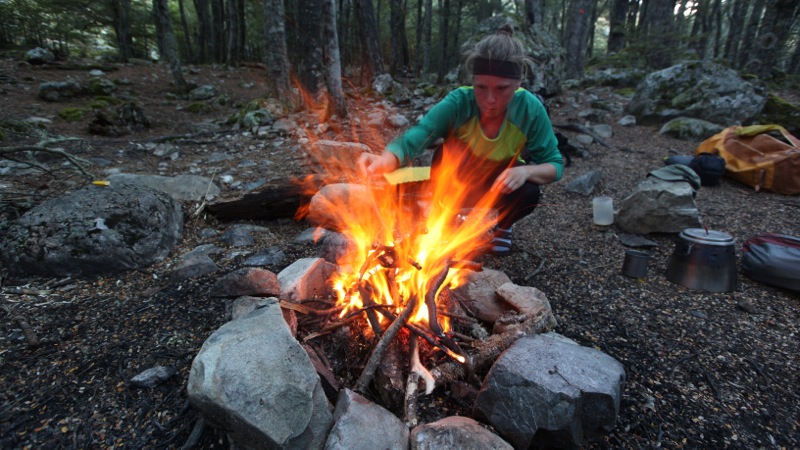 The ‘informal campsite’ appeared just after the Forest Throne, and there were some excellent flat spots and a gushing river of fresh mountain spring water to gorge on. An old firepit was obvious and some kind person had already collected the logs. Some kindle collecting later and it was time to stoke up, get the spicy noodle soup on, grab a seat and get comfy. I tell you, there’s nothing much more satisfying than making and tending yourself a good fire. I’m surprised TV ever caught on when you had the chance to do this every night in the olden days :) Give me crackling sticks any day.