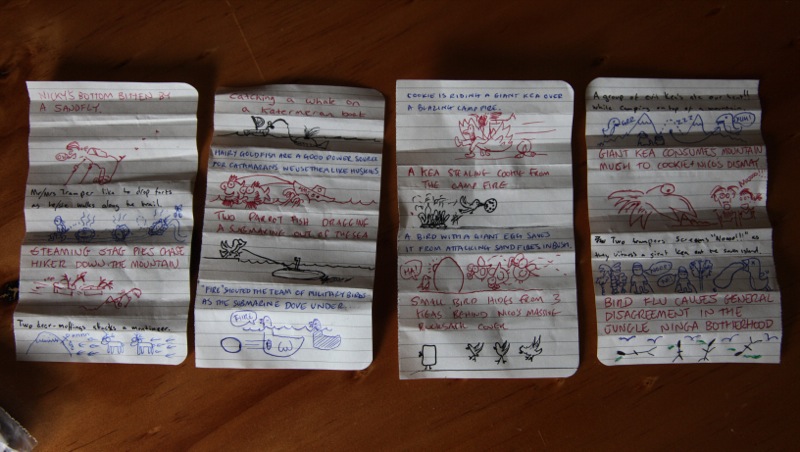 We met some great people on this section as we bounced from hut to hut. Sometimes you just get lucky and time it just right to catch a good bunch en route. Michael, Crissy, Mary Rose, and Jai were a brilliant laugh, and interesting conversation was always the order at tea time.

Later in the evening, after a few fruity rums had been supped upon, the idea of playing the old classic ‘Cat Eat Poop’ emerged. A descriptive game of misdirection and confusion. Always a crowd pleaser :) And best played with an odd number of ( slightly demented ) people, for best results.

It’s actually called Eat Poop You Cat (we’ve always wrongly called it as ‘Cat Eat Poop’ though..), it’s a surrealist game a bit like Consequences and Exquisite Corpse, but more of a mixture of the two.

Rules:
Basically everyone writes a sentence on the top of a piece of paper, then passes to the next person. Next stage you have to draw a picture of the sentence you’ve just received, then fold the paper so that the original sentence can’t be seen and pass it on. Next stage you have to write what you think the picture is of, fold then pass on, then draw again etc… Generally you finish when you run out of paper.

One of my all time favourite games, more about it on my blog here.