Speeding Ahead – from Mid to Top Wairoa Hut 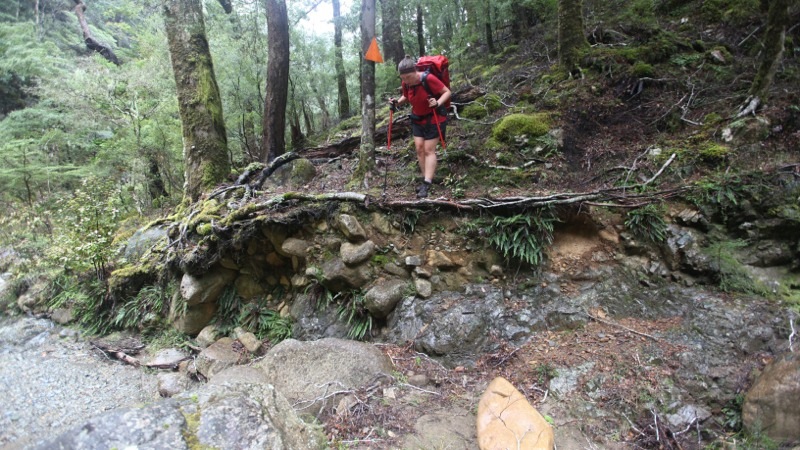 Soaking and bedraggled we lunged at the hut door and staggered in. “Oh Hello!” a fellow inside announced. Surprised to see two muddy, water-dribbling hikers splutter in.

Whenever you see another human in the mountains it’s a surprise. You treat it almost like having spotted a rare species. With surprise and intrigue you examine what you’ve found :) And they you.

This chap, we did not realise til later, we’d been chasing him since the Tararuas on the North Island. He was in fact the mysterious Mr. Dominic Kling from Ulm in Germany. His name had been appearing and disappearing in hut books for weeks. Last we knew he was the last person who got through to Otaki Forks before the cyclone came and we had to turn back. What was he doing going the wrong way up the track? Glad he made it anyway.

“Watch out. Are you going up to Top Wairoa? It’s very slippy. Take care eh.”

Leaving Dominic perplexed as to how I’d managed to guess his last name, we headed out in our fresh clothes, togged up in our waterproofs. Determined to get to Top Wairoa and ahead of schedule. Every hut brought Beer-o-clock ever closer, and the promise of bubbly wheaty goodness in a few days time powered us on into the drizzle and mist.

I’m not entirely sure if our decision to do the Mid Wairoa to Top Wairoa Hut section at 4.30pm in the rain was a stroke of genius or lunacy? We decided that since we were already wet from the tramp down from Tarn that we might as well try and get the section done this afternoon so that we could dry our boots overnight and start dry(ish) the following day.

Also if the rain kept pouring we thought the numerous unbridged river crossings between these huts might get tricky or impassable.

Also Mid Wairoa was already occupied by Dominic, we’d been sharing huts for the past few nights and really fancied one to ourselves for a change. So onwards we went into the misty damp valley beyond. It was 4.5 hours to the hut, we had 4.5 hours of daylight left, there was no messing around setting up cameras on tripods for this section, we just wanted to get there as fast as possible.