Rescued by the Best Beef in New Zealand 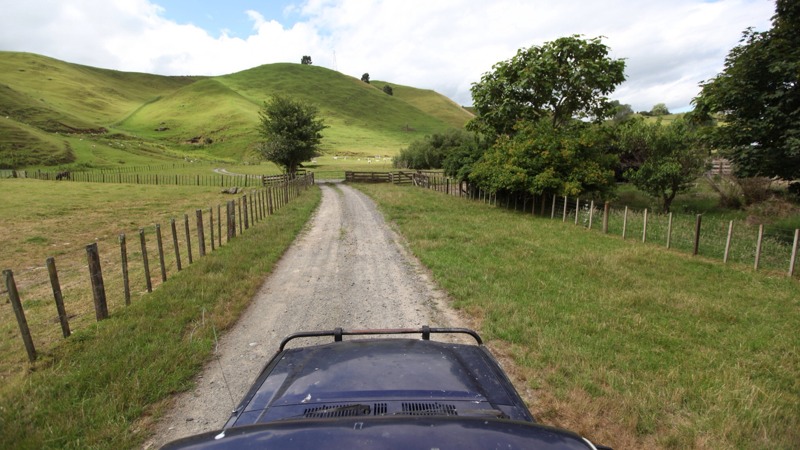 Thank you Don the Farmer! And your daughter for dragging us up the hill, and riding us off to safety in your ute. And for the ham sandwiches and cups of tea. I am so thankful. I had visions of us huddled up on the bank for hours waiting for a passing boat. Don’s daughter had all kinds of scary tales of people they’ve dragged out of the river in the past. We sounded like we’d got the luckier end of the scale thankfully :o

Currently we’re chilling in the guest house up at the kayak place. It’s been pouring down and the wind has got up. We camped last night and all our clothes were soaking and mud covered… Ergh. The river looks wide a brown with flood water now… Should we try again tomorrow? I’m petrified! : /

There’s a fine line between brave and stupid? For me anyway! I think some of these Kiwis are rock hard.

…Yep, I kid you not, Rescued by the Best Beef in New Zealand, you can’t make this shit up! Anyhow, I didn’t have to trespass far before I eventually bumped into the farmer Don and his daughter (I think) Cherie. They knew the score, “Don’t worry, we get this ALL the time in the summer. You actually look in quite good condition, usually people are in a RIGHT state by the time they stumble onto the farm..” To cut a long story short the farmer helped us man-haul the kayak up from the river to a point where the hire place could get to it (not an easy task, still got 8 days of food in it remember). We then went back to the farmhouse for ham sandwiches and a hot shower while they phoned Taumarunui Canoe Hire.

I’m still blown away by ‘Kiwi Hospitality’, Don & Cherie were so kind and really looked after us :) Anyhow back to the beef, turns out we were shipwrecked on no normal farm, by the look of all the ‘Meat Awards’ hung on the farmhouse wall, this was a serious meat manufacturing farm of excellence, which has won the ‘Best Beef in New Zealand Award’ a number of times. When the Karen (Canoe hire lady) picked us up, all she could talk about was “Have you seen the muscles on his bull calves, oh my gawd they’re amazing. Even his bloody cows have massive arse muscles”. I don’t know much about cows, but I’d agree, they did have big back ends, I also knew those backends were responsible for a good deal of unpleasantness I’d just dragged my kayak through… Poor Josh (our recently hired river guide), got a whole Croc (sandal) full of it.. “It’s alright” he says, “they’re not my Crocs!” Ha ha, always look on the bright side eh?