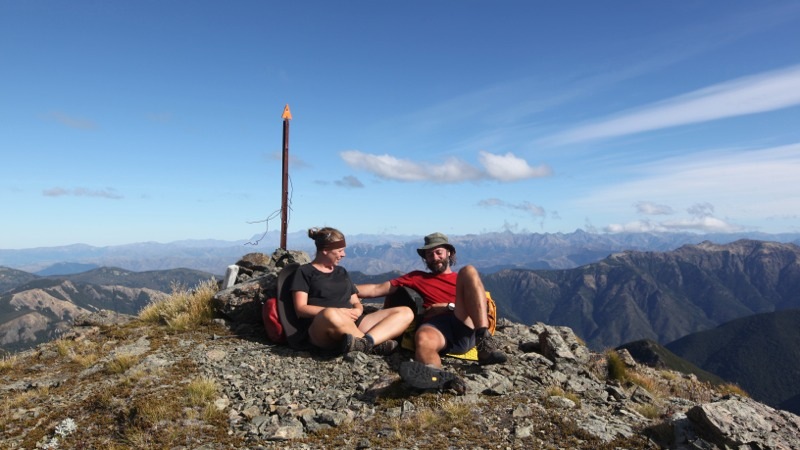 I couldn’t look down. I didn’t want to gaze around. The anxiety and adrenaline was threatening to overwhelm me. I knew I was up here to appreciate the views. But looking at those rows of giant peaks in the distance just made me want to vomit. What the fuck was I doing up here?

I stared out at the surrounding ranges. Trying to take a mental picture to appreciate with hindsight later. Eyes wide ( with horror really! ) at the situation I’d gotten myself into. There wasn’t the relief and satisfaction I’d imagined getting to the top. Just an overwhelming sense of ‘anticipation’ ( read: ‘expectation of impending panic’ ) about getting down the other side. Making it between the two Rintoul peaks was one thing, but apparently the worst was yet to come? Or so said the trail notes…

Fantastic views up here and we were blessed with perfect weather for it :) There’s certainly A LOT of mountains in the South Island, row after row of spikey mountain ridges disappearing into the distance.

Wished we could of stayed here longer, but after a day of stopping every 5 min to film or take pictures it was getting late. 6pm to be precise, we’d been on the go for nearly 11 hours already and still had to get down yet!