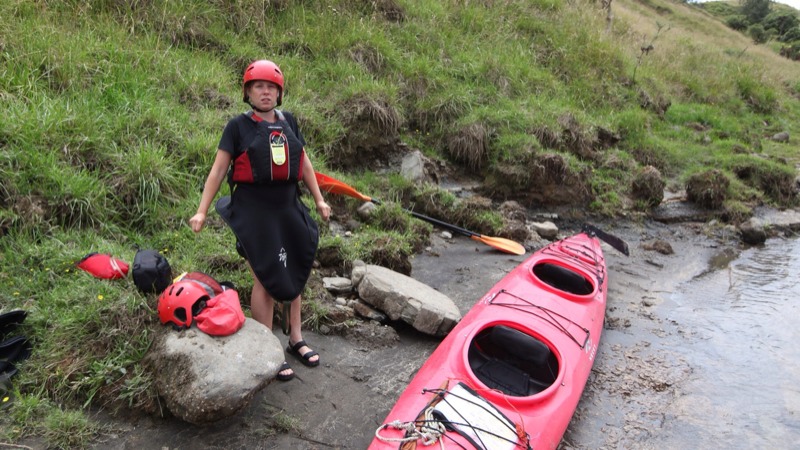 I’ve been so excited about rowing down this river since we decided to come to New Zealand. I imagined floating along with the sun twinkling through the trees, fishing rod in the water, and pausing for picnics. The reality was a fast flowing river full of boulders, and strip after strip of rocky wavy rapids. I hadn’t really appreciated this. And once you’re in a kayak hurtling down the river there’s not a lot you can do about it! :/

Feeling well rough for a few days probably wasn’t helping but suddenly realising you’re totally out of your depth in a situation like that is unnerving for sure! It had rained a lot over Christmas and the water, although dropped a bit, was higher and faster than normal. In theory that should make it easier. But clearly Cookie and I hadn’t got our steering rehearsed for strong currents and time after time we slammed head-on into boulders catapulting us into the water, the upturned kayak smashing down on your head as you scrambled to grab something and pull yourself up for air. The water is fast and your legs are swept away smashing against sharp rocks and boulders. It was all I could do to just keep hold of the string on the side and keep my head above water while I coughed and spluttered and gasped for breath, the capsized boat filling with water…

This kayaking is not much bloody fun!

After volcano fun with my parents, they gave us a lift this morning to start our much anticipated kayaking adventure. We’ve hired a doubled kayak from Taumarunui Canoe Hire and filled it choc-full with 8 days worth of food & rum, ready for 150 miles of paddling aaaaall the way to Wanganui. It’s a semi-official part of the Te Araroa, the official trail doesn’t actually meet the river until halfway down, but this is a popular (and shorter) alternative.

The Whanganui River rapids are classified as Class I and II on the international scale, which means it should be an ideal river for land-loving idiots like us. There are 239 of them mind, and there’s been A LOT of rain recently, so she looks pretty fast and furious to me.. Here we go!

So what happened?
Not much visual evidence, as there was way too much spray in the face to risk getting the camera out, but by my reckoning we were going backwards after a spin by rapid No. 7, had run aground and need to get out and push by about No. 10. Trying to pass on the righthand side of a big boulder, that the river really wanted to send us down the lefthand side of, left us heading straight for it and promptly tipped out in to the river, on maybe No. 16. After quite a bit of encouragement, I finally got Nicky back in the kayak only to be tipped out again on a really lame bit of river somewhere near rapid No. 18 by a submerged rock with no white water in sight. Not a great start..