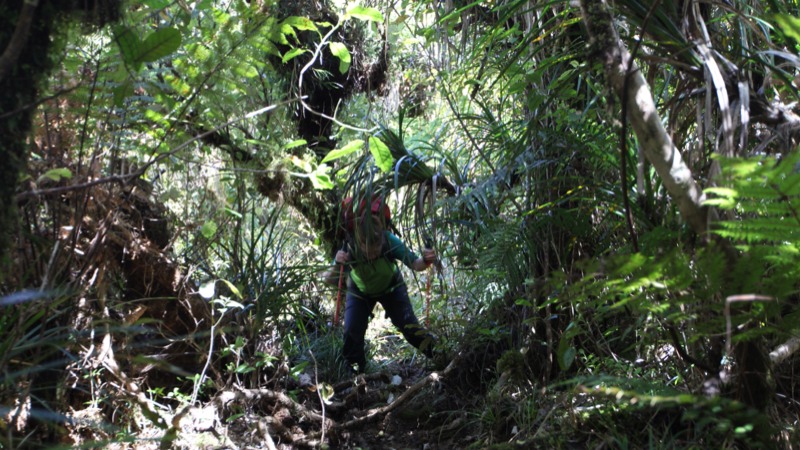 OMG that was hard. When they say ‘it’s a jungle out there’ they must have been talking about Raetea ‘Forest’… Being a novice hiker i’ve been expecting this trip to be hard, but seriously this was tough going! I even spotted veteran explorer Cookie mopping his brow and mumbling ‘Jesus Christ’ a few times.
Proud to have made it through and out the other side! :D

It was full-on hacking through foliage on steep boggy ground, absolutely root riddled for extra slippery jeopardy. We were enclosed in thick wet green-ness, battling up and down the dimly lit, densely vegetated ridges and peaks. Clambering under and over fallen trees, scratched to buggery and bitten to high heaven. Itchy, stinking and dehydrated, pushing through bushes, branches, and fallen palms, hunting for small trail markers nailed to trees. With salty sweat trickling into our eyes and mouths, areas of low flax, sharp pampas grass gave light relief from the darkness of the canopy looming over, but cobwebs and spiders in the face were always a hazard when going first :) In fact – Rule #1 in the jungle – keep your gob shut! ( Unless you want it full if bugs ;) )

Other hikers talk about this section, and I don’t know if they are modest, or just don’t want to say how tough it was. But it was pretty intense! Perhaps they are just much faster than us and smashed through it quite swiftly. Cookie on his own could have got through there in half the time with out Captain Slow here! Fingers crossed I get fitter faster so there’s less time to be had loitering about in disorientating claustrophobic semi-tropical jungle ;)