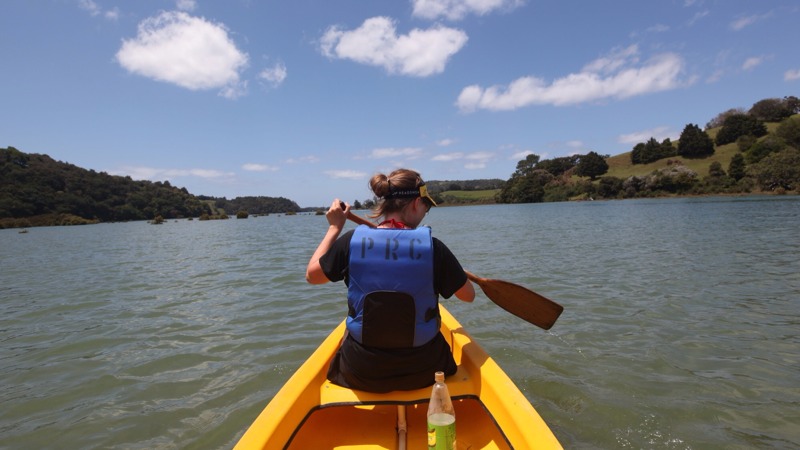 When we got to the hire place and they saw our packs they knew immediately we were on the Te Araroa trail. We’ve been following in the footsteps of 3 hikers for over a month now, and it turns out we’d missed one of them – the infamous Dirk – by about 15mins! We’d been hearing about him everywhere we’d been. We had to jump in the water and chase him down!

Well, it seems that paddling with massive wooden paddles in a chunky boat is much slower than a slick streamlined sea kayak with double paddles … Especially when you stop every 5 mins to film another angle, or backtrack to re-take a shot ;) There was also a bit of a wild goose chase ( quite literally ) … We thought he was a swan.. and after ‘furiously paddling’ to get an up close shot he turned out to be the ugly gooseling instead.

Anyway, it was lots of fun, and thinking we’d missed our hiker compadre we pottered up and down tributaries merrily in the sunshine, shouting at wildlife, and singing pirate songs.

When we finally rocked up at the beach and clambered ‘gracefully’ out, we spied a hiker, socks-off under the tree… We’d got him! It was The Dirk! :D We couldn’t believe we’d caught him up. ( But then we realised he’d actually been waiting about an hour for us! Haha :o – Sorry Dirk!  ).