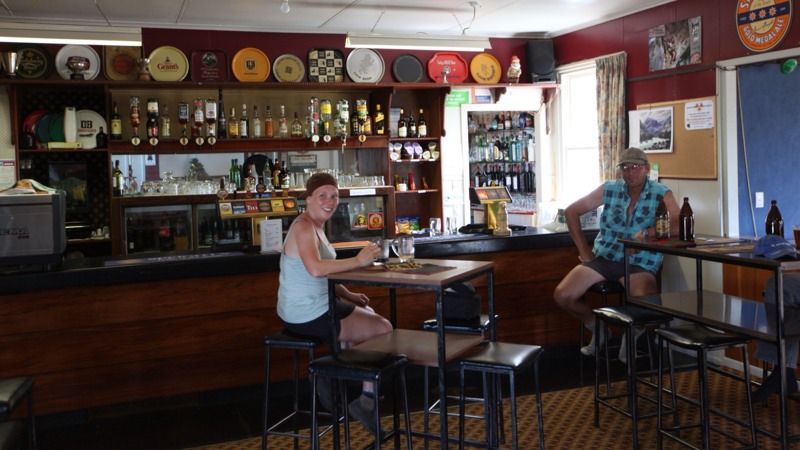 Melting in the sun, and creaky kneed we arrive at Fordell and spotted the hotel sign on the pub. WeyHey! We stagger in and order an ice cold beer. Turns out that one of the two customers in there was actually the landlord Duncan :) He said he’d never seen anyone actually walk there and was pretty stunned when we hobbled in with our giant rucksacks. Explaining that the hotel shut long ago, he immediately offered us a room upstairs and insisted we join him in a pub crawl! What awesome hospitality! Telling him all about the Te Araroa trail and what we were doing he offered us a go on his motor bike and all sorts. But thinking we’d probably not done enough miles to cover our day yet we were keen to head on to our next stop Turakina. “No problem! Ah there’s a great pub there, Eric stick their bags in the Ute”. And off we went!

On recounting our Taumaranui canoeing tales it turns out they know the farmer that rescued us last week! Haha. Very small world NZ :D

The pub in Turakina contained some friendly locals too, who joked when we walked in, clocking the sticks and packs, if we’d been up Mount Ruapehu. On saying we actually had, they perked up, and again offered us beers and insisted to help us on our way down to the beach campsite :)

We covered loads of miles and ended up a bit tipsy ;) A successful day all round I’d say!

Duncan was so excited to hear that the Te Araroa trail passed by his pub, wanted to hear all about our travels and where we’d been. Bizarre end to the day to the day for sure! I was really tempted to go on the pub crawl with Duncan & Eric, but looking at the empty beer bottles they’d already consumed and thinking about possibly racing round the countryside on trail bikes, pub to pub, filled me with excitement and fear..

Upon arrival at the Ben Nevis pub in Turakina, the locals sat by the window exclaimed “You didn’t get a lift here with Mad Eric did you? Jesus!”. Ha ha, I’m sure there’s a funny explanation why Eric got his ‘Mad’ moniker, but didn’t think to ask at the time, I was just happy that we chosen not to take a backy on his bike!

Turns out these guys live in the little beach town of Koitiata, which is where to trail heads next, it has a campground we’re told and the offer of a lift to it, is promptly accepted (we are feeling a bit rusty you see). They’re in the pub to get internet reception and because it’s so slow, we get through a few rounds of beer and conversations of lost cats on airplanes before we finally get on our way.