Back the Way We Came 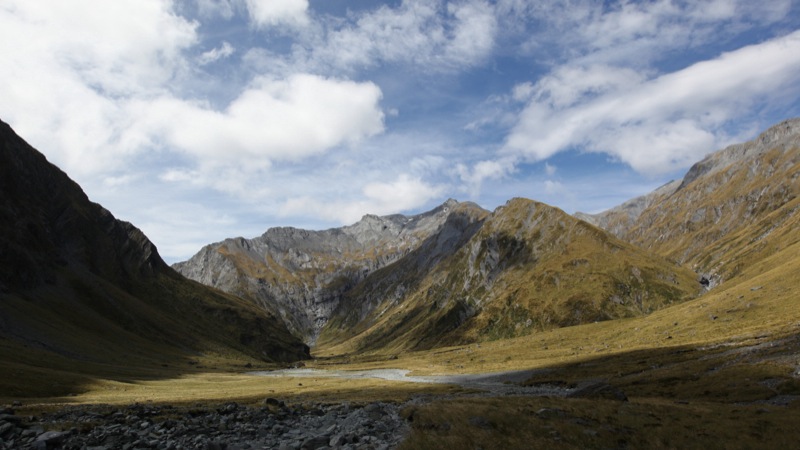 MISSION ABORTED! I pulled the ejector cord, and we’re outta here! Sometimes you gotta know when its right to turn back. Rather that, than have to press the ‘helicopter button’… Or worse :-/ We’ve done some brave things this trip, but I was really unsure about this. I’m so thankful we came down when we did because …

A half hour later it started to rain, and the bad weather rolled in for the evening. I was so glad we weren’t camped up there on an exposed pass in roaring wind and wetness, or even hanging onto the cliff! It would have been extremely dicey. PHEW!! A good call in hindsight.

Even though we didn’t make it over, I think it was good experience for Nicky to come up here and give it a go. She’s learnt a lot this holiday and is gaining confidence with each new challenge. In a few days time we’ll be going over a similarly steep grassy slope on Cascade Saddle which I don’t think she’ll be as scarred by now she’s a bit more familiar with the terrain. We’ll see!

It actually made feel much better when the rain clouds rolled in early, in the end it was fortunate that we turned back. Wouldn’t of been much fun or particularly safe up on Rabbit Pass in the rain.

Update: Later on the trail we bumped into the three Dutch fellas who went up the day before. On asking how they enjoyed it, pale faced and with many sharp intakes of air they described how hair raising it had been, how they’d lost the route and ended up dangling, hanging off of handfuls of slippery snow grass. Clearly they’d had a bit of a harrowing experience! They finally made it over the top, but it had taken hours, and all of them vehemently wowed they’d never do it again! By the sounds of it the way down the other side was non too fun either :)