Across the Cook Straight on the Interislander 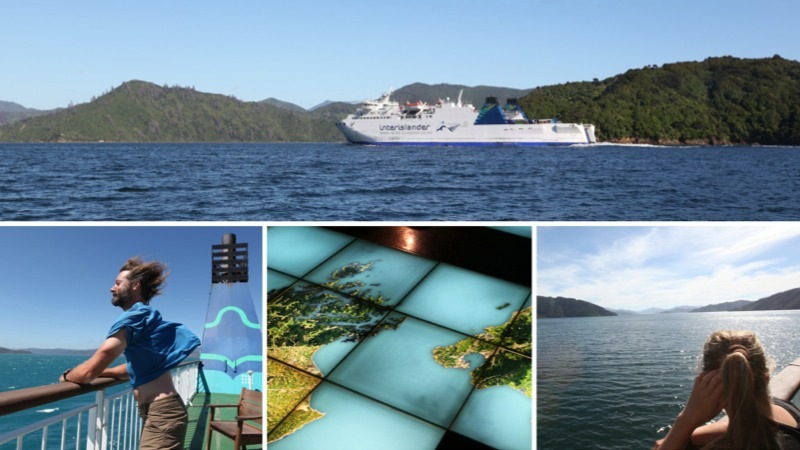 So we’re off! Bye bye North Island… Hello South Island. After a bit of grey and miserable time in Wellington, what with weather, computer crashes, upset tummies, shops closed, and general knackeredness, in a way we were glad to be on the move. Wellington hadn’t been the all singing, all dancing, brazilian carnival of a celebratory finale that I’d imagined.

But now, we were movin on, preparing to start a new phase, and it felt good. Proud of what we’d achieved, we climbed aboard our lift to Part Two of the holiday. The sun was shining, and the fish and chip shop was open. Life was good again :)

After feeling slightly underwhelmed by the achievement of ‘halfway’ while in Wellington, the boat ride across the Cook Straight was quite satisfying, it finally sank in that we’d done the North Island and we’re starting a new exciting leg of our journey.

Some of you may be wondering about this fancy photo montage? We downloaded a new app while in Wellington called Diptic, I’m mighty impressed with it so far, more examples to come! While I’m on the subject of iPad apps, I’ve been meaning to mention Photogene for a while, we use this one to crop, resize and FTP photos to our server, an invaluable tool for blogging on the road. We had a minor disaster in Wellington trying to update this app to the latest version, it required us update the iPads iOS. Big mistake.. The staff a Magnum Macs were very patient with us while iTunes did it’s back up thing many times (Apple, really?), not a quick task when you have 30GB of photos on it.. Anyhow we weren’t patient enough and cancelled the secondary good measure back-up, after the first or second back-up, we lost count.. We corrupted the back-up which meant there was no longer a back-up to back-up from, so we had to restore it to factory settings and lost everything on there.. Oh well, not really a big deal, just a wasted day hanging around in a shop..