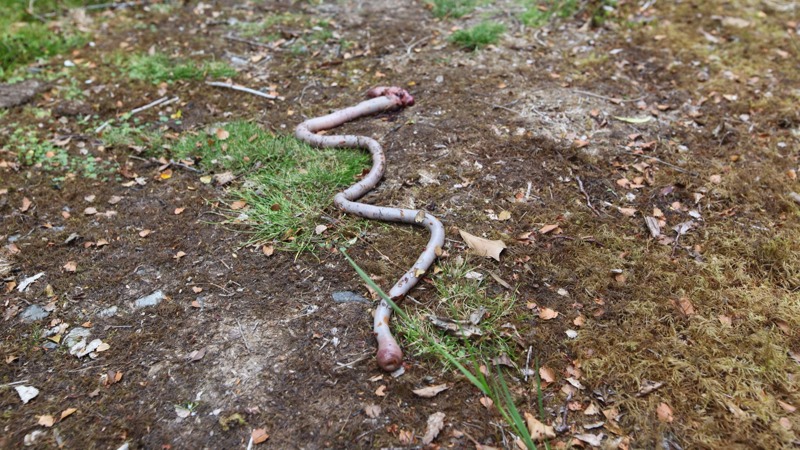 Holy Moly! Either this is the biggest worm I’ve ever seen or someone is missing some intestines! I wasn’t sure which for a minute! Closer inspection revealed a grooved texture to it, and one end that clearly looked to be the bum. ( I think – either that, or worms have pretty ugly faces ). Anyway, the picture doesn’t show the scale well, but he was fatter in diameter than my finger. Probably not quite 2cms but not far off. He was tightly condensed but I imagine if he was laid out straight he’d have been well over a metre in length. Whatever pulled him/her out the ground must of had a serious fight on their hands. Would it be a possum or a bird of prey that nabbed him? To be honest I don’t fancy it for lunch. If I’m going to eat something, I at least want to know which way up I should be holding it!

I had no idea we’d find giant worms in the Tararuas. Giant dragonflies too, and spiders. It’s like some kind of Jurassic park lost world. Either that or when we get to town we’ll find ourselves in a shrunken Gulliver’s Travels type situation. Wouldn’t be too bad. At least the pints will seem like proper pints!

This morning we found this lying in the path, just outside the long-drop.. From a distance I thought it might be the entrails from some poor disemboweled woodland creature. As we got closer it started to look like a flippin’ huge worm, do worms really grow this big?!?

After a bit of googling we found a species called the North Auckland Worm (Spenceriella gigantea), that apparently grows up to 1.4m in length. I’d say that Wally the Whopper Worm here was fully grown because he was definetly over a metre long.. We also found out that they glow in the dark, apparently one worm emits enough light to read a book by at night! Sadly what ever pulled him out of the ground, came back for seconds while we were up on the ridge and we never got to try him out that evening.