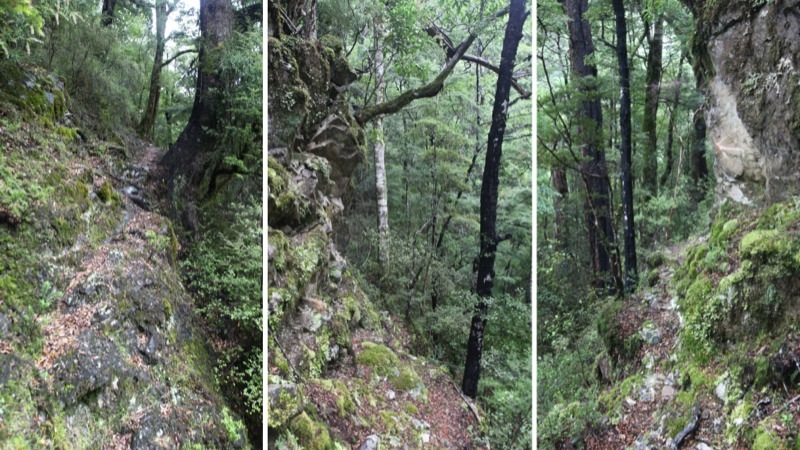 Terrain. From. Hell.
In hindsight, leaving Mid Wairoa that late in the afternoon, in the rain may have been a mistake. The drizzle turned to heavy fat plops of liquid, and the leaves and roots quietly lubricated themselves ready to receive us on their mean and vicious assault course high above the roaring river. This was starting to look tricky.

Every footstep you took threatened to flip you clean over. Each mossy rock activated, and layer of leaves on standby, to terminate your progress. I use the word ‘terminate’ carefully. It was a steep and exposed route. Thin paths often only a single boot’s width, cut into the side of the rock or crumbling soil, undulating steeply up and down, round outcrops of rock and over bases of trees on their last legs, jutting out into the high gorge-like valley. The mist was thickening. The terrain slow and torturous. Time was running out. It would soon be dark. And this mess would be impossible to negotiate in the dark. It was lethal enough in day light. In the dim light we picked on, stopping occasionally only to realize our precariousness position, scrambling above the deep valley of boulders and waterfalls below.

“Shit it! I wish I could see!” Eyes straining to pick out safe footing, I began to regret only purchasing prescription shades, and nothing more… By no exaggeration, one failed step and you’d have slipped to meet your maker. A fairly stressful way to spend an evening.

158cms is not tall enough for the Te Araroa. Time after time Cookie had to physically haul both me and my backpack up chunks of rock and massive steps my little stumps just couldn’t reach. Or exhaustion wouldn’t allow. If it weren’t for him I’d still be left there clinging to some crumbling earth on the ‘sidle’… Or worse!

Can you see the track in these three different shots of it? Yep, thats what we thought.. Soon enough we realised that Dominic’s account of the poor trail conditions were all true. There’s some pretty exposed bits where the trail clings to tiny little ledges high above the river below. It was a scramble not a walk, not much margin for error..

We did discuss the option of either turning back or camping between huts. I was encouraging Nicky to carry on though, her imagination is her own worst nightmare, there’s no way I’d get her up this valley if she had a night to think about it!